Hemp Terpenes and Their Benefits

You have probably heard the word “terpenes” when it comes to hemp and cannabidiol (CBD). But what are hemp terpenes and what are their benefits? How are they connected exactly?

Terpenes are highly functional compounds that are plentiful and give many substances their smell. Many people utilize terpenes for anxiety, energy, and even more.

Read on to find out whether you can use terpenes for anxiety and other common conditions.

Terpenes have multiple uses, with different names and purposes in every form they take. Some are used just for the scent, but many have a great deal more to offer.

Terpenes are popular in the CBD and THC world, but their origins, uses, and benefits extend far beyond that. They are studied for their antimicrobial activity and even more potential benefits. 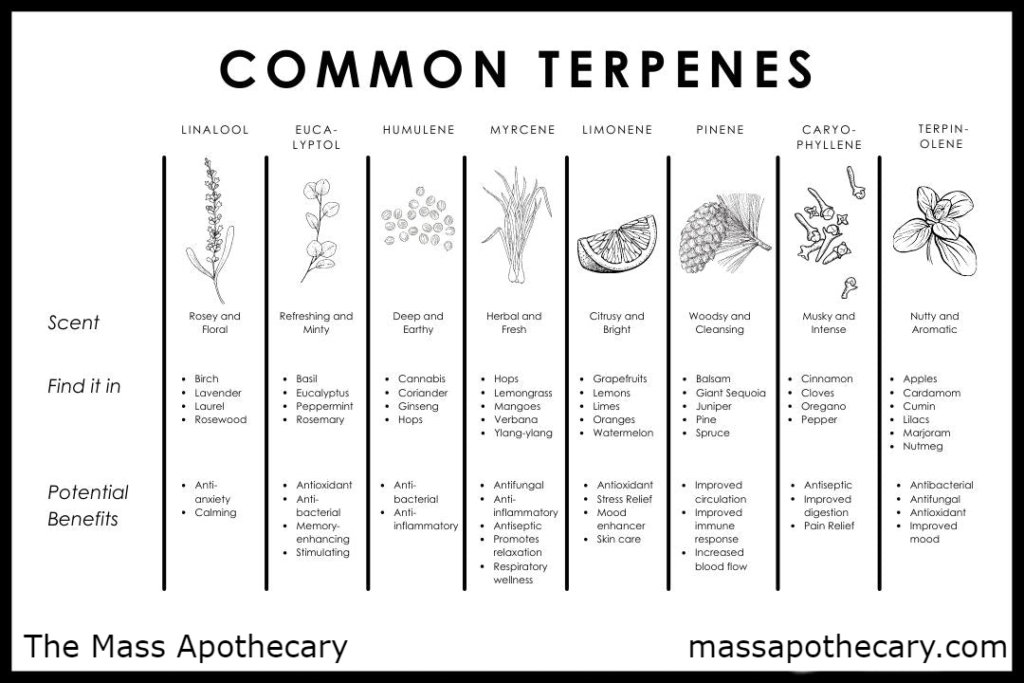 What Do Terpenes Do?

Each terpene has its own unique profile and special properties. Check out the list of top terpenes below.

Commonly found in ingredients like lavender, rosewood, birch, and laurel, the Linalool terpene is most commonly used for its calming sensation.

Recent research has shown that linalool may have protective properties. Scientists think this is a promising potential therapeutic agent and that it may protect against neurodegenerative disease. It may help guard against oxidative stress (cell damage) that is involved in the pathology of so many diseases.

The Eucalyptol terpene (not surprisingly) is most common in eucalyptus.You can also find eucalyptol in peppermint, rosemary, and basil.

This terpene boasts a long list of possible benefits and beneficial properties, including:

Eucalyptol is also a stimulant, meaning it may increase blood flow and support your respiratory system. It’s why you always feel so refreshed after that peppermint spray, or focused after that eucalyptus shower.

Humulene is one of the most classical cannabis terpenes. While Humulene effects aren’t altogether different from Eucalyptol, their profiles very much are.

Humulene is most commonly found in hops, coriander, ginseng, and cannabis. While some would describe the processed scent profile of cannabis as “skunky,” this raw terpene has quite the depth of profile. Humulene’s potential benefits may include being antibacterial, anti-inflammatory, and even anti-fungal (especially when combined with essential oils).

Hops is notorious in beer for its incredibly herbaceous and deep notes. Coriander is known for its middle eastern flare and earthy spice. While ginseng is quite a bitter, earthy root with a touch of sweetness (not unlike a carrot).

Some people believe that myrcene helps to enhance the psychoactive effects of THC, though there’s no study to back these claims. Myrcene may, however, be antiseptic, antifungal, and anti-inflammatory — and these benefits are capable of promoting relaxation and respiratory wellness.

Limonene is known for its bright, citrusy, clean smell. It’s an incredible antioxidant that is typically isolated from citrus fruits. The potential benefits of limonene are linked to stress relief, appetite control, mood enhancement, and skincare.

Of course Limonene is found in lemons, but it’s also found in most citrus. It’s effects and scent come primarily from the peels and rinds of limes, oranges, grapefruits, and even watermelon.

Many companies take advantage of the masculine musk of pinene terpenes by using them in male fragrances, toiletries, and cosmetic products.

Also known as Alpha Pinene, this terpene is most commonly found —you guessed it— in pine. As a matter of fact, most any coniferous plant contains pinene or a related variant. Find it in  juniper, to spruce, to balsam, even to the Giant Sequoia.

Pinene is considered a bronchodilator. In other words, it helps to open airways and lungs.  Its effects are also thought to improve circulation, blood flow, and improved immune response. It’s also been linked to anti-inflammatory, anti-anxiety, and pain relief properties.

Like most other terpenes on this list, Caryophyllene is also considered anti-inflammatory. Additionally, it’s been studied for its potential as a gastroprotective compound. This means it may protect your gut.

Found in cloves, pepper, cinnamon, and oregano, caryophyllene is known for its striking pungency and spice. These deep, peppery, scents have historically been used in some form of pain relief as they’re all antiseptic in nature. These antiseptics may also help to regulate the bacteria in the gut, helping your microbiome to thrive.

Think of terpinolene as the milder, sweeter, deeper noted little brother of Caryophyllene. Most notable for its nutty, woody, spice profile, terpinolene is most commonly found in:

Many of these earthy scents are involved in the holiday season because they’re thought to be mood boosters. Potential benefits of terpinolene include properties such as being an antioxidant, antibacterial, and antifungal properties. However, unlike most others, terpinolene effects don’t have any anti-inflammatory or analgesic qualities.

It doesn’t take any guesswork to understand that terpenes enhance olfactorily sensation. They all carry vibrant, distinct, and mood altering scent profiles with them. They may impact you the same way aromatherapy can.

While these aromatherapy qualities affect a person’s mood and stress levels, terpenes are also bioactive, meaning they may quite literally alter the chemistry in your body. They have the potential to upregulate production of neurons, chemicals, and natural responses, without altering the DNA or RNA on the cellular level.

Just like CBD, different scents can affect different people in different ways. It’s important to start small when testing out how you respond to certain terpenes, then work up from there. 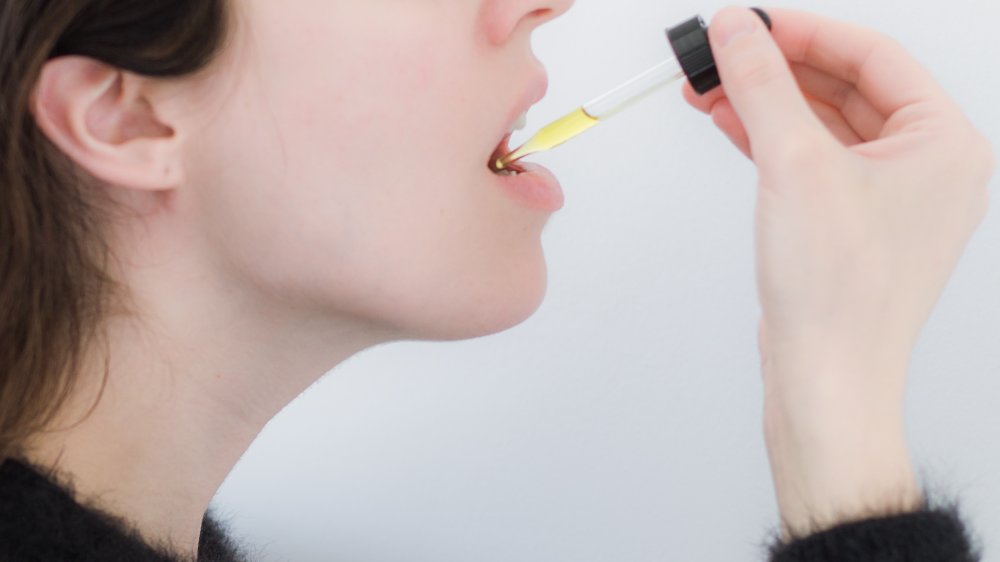 The Bottom Line On The Benefits of Terpenes

CBD is thought to have many beneficial effects. Some of its potential is linked to the terpene profile it contains. Learning about terpenes can help you understand more about your body and how to encourage a positive experience with CBD and aromatherapy.

Potec K, Olechowska K, Klejdysz A, Dymek M, Rachwalik R, et al. The influence of ergosterol on the action of the hop oil and its major terpenes on model fungi membranes. Towards understanding the mechanism of action of phytocompounds for food and plant protection. Chem Phys Lipids. 2021;238.